Treaty Creek is joint ventured project. Tudor Gold is the operator of the project. American Creek Resources has a 20% fully carried interest in the project until a production notice is given (More).  Therefore, more geological information can be found at Tudor-gold.com.

The Treaty Creek property is located within one of the largest hydrothermal systems in the world. The Sulphurets Hydrothermal System (SHS) contains numerous world scale deposits including the high-grade Brucejack mine (opened 2017 by Pretivm) and Seabridge’s KSM which boasts the largest undeveloped gold deposit (by reserves) in the world, and numerous mineralized zones on Treaty Creek.

The northern half of the system covers Treaty Creek and has similar geophysical, geological, and structural signatures as the southern half but is blessed to be "on the right side of the mountain" only 20km down a valley to the highway (90 minutes to a shipping port) and high transmission power lines. From there it’s only 90 minutes to bulk tonnage shipping port terminals.

The entire Sulphurets Hydrothermal System is connected at depth with strong indications that the north half has similar scale and potential. This projection is backed by a government geological report stating Treaty Creek’s potential to be “B.C.’s next big discovery”. -Kyba 2014. 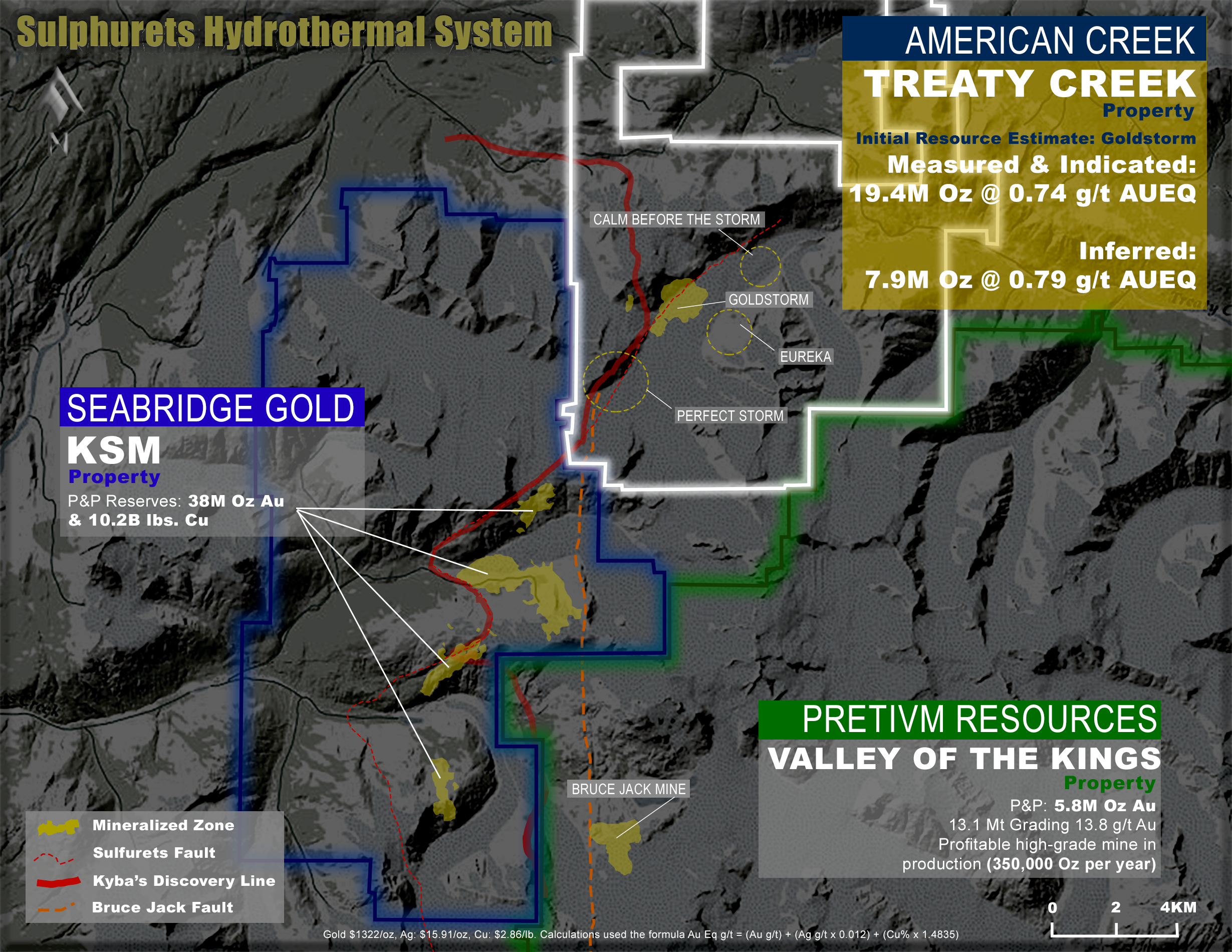 Vice President: Project Development for Tudor Gold, Ken Konkin (who was responsible for the development of the Pretium Resources Brucejack Mine just a few kilometers south of Treaty Creek) is an expert in both large scale systems and geology in the Golden Triangle.  He has often spoken of the importance of the “frequency for occurrence”, “frequency for distribution”, and “structural traps” of world class hydrothermal systems that create a predictable “rhythm”.

He’s stated that the SHS is a perfect example and refers to its many deposits as a “string of pearls……just really big pearls!”  Below is an image showing existing and potential “pearls” in this system 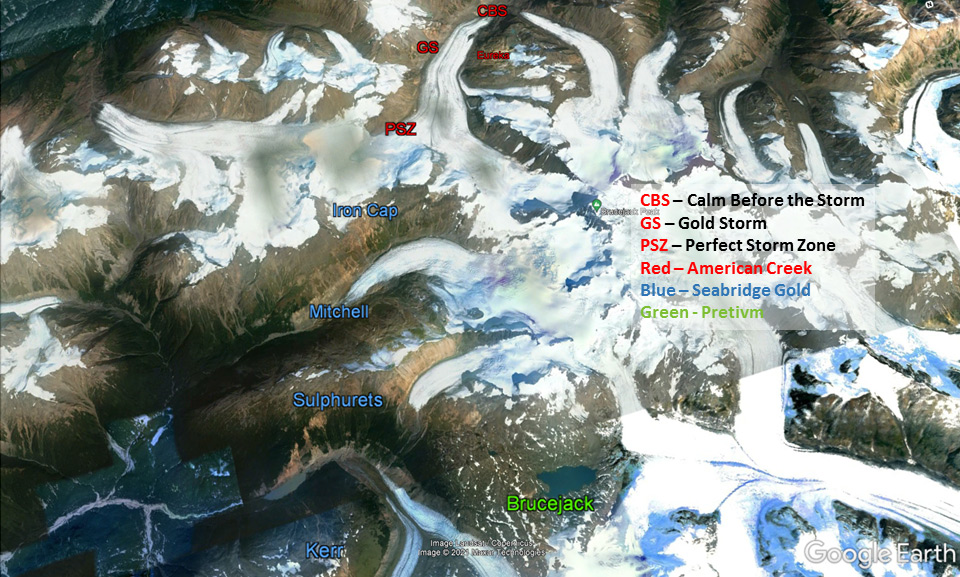 The Kerr, Sulphurets, Mitchell, and Iron Cap deposits are part of the KSM system owned by Seabridge Gold and constitute the largest undeveloped gold deposit in the world by reserves. The Treaty Creek mineral claims boundary is just above the Iron Cap deposit in the image above.  The geological sequencing or rhythm of the SHS has produced a district-scale porphyry deposit every 2.5-3km.  The Perfect Storm, Goldstorm, and possible Goldstorm II zones are in the perfect and predicted locations to continue the “String of pearls” Konkin spoke of.

The SHS shares a common bedrock geology which primarily consists of the metalliferous Hazelton rock group.  When the SHS formed it was a volcanic island arc chain in the Pacific Ocean that was active far longer than other similar systems and therefore richly endowed.

The Sulphurets Thrust Fault that runs throughout the SHS is a major factor in the formation of large porphyry systems along it.  Seabridge has stated that it is directly related to the Kerr, Sulphurets, Mitchell / Snowstorm, and Iron Cap deposits.  It appears that the Sulphurets Thrust Fault continues through the heart of Treaty Creek and is associated with at least the Goldstorm and Perfect Storm zones.

Treaty Creek has a dozen zones of mineralization identified so far.  We believe that many of these are surface expressions of a much larger geological system at depth.  The two zones currently being focused on are the Goldstorm and the Perfect Storm.

A very successful program in 2020 with 44,000m of diamond drilling reached depths of 1,432m and still in 0.5 g/t AuEq mineralization.  A drill program will be launched in the spring of 2021 to search of the corners of the Goldstorm.

To give a perspective on the scale of the Goldstorm as it stands today here is a list of drill holes that run close to 1 gram per tonne (average mine in the world is just over one gram per tonne) over a length close to or greater than the CN Tower in Toronto (553m or 147 stories high): 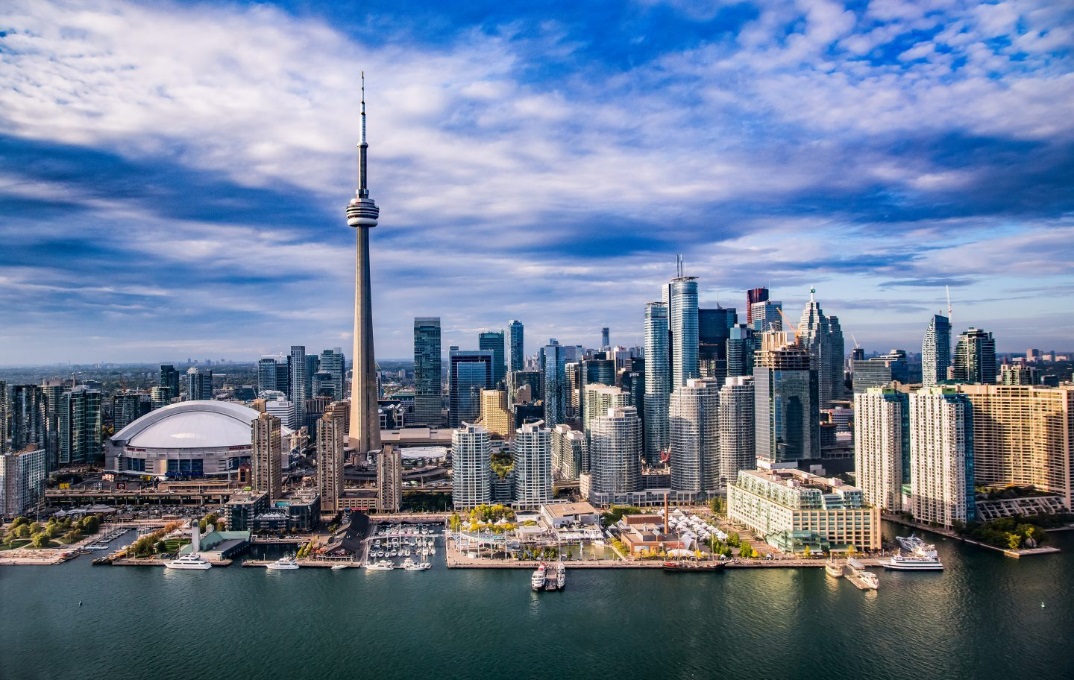 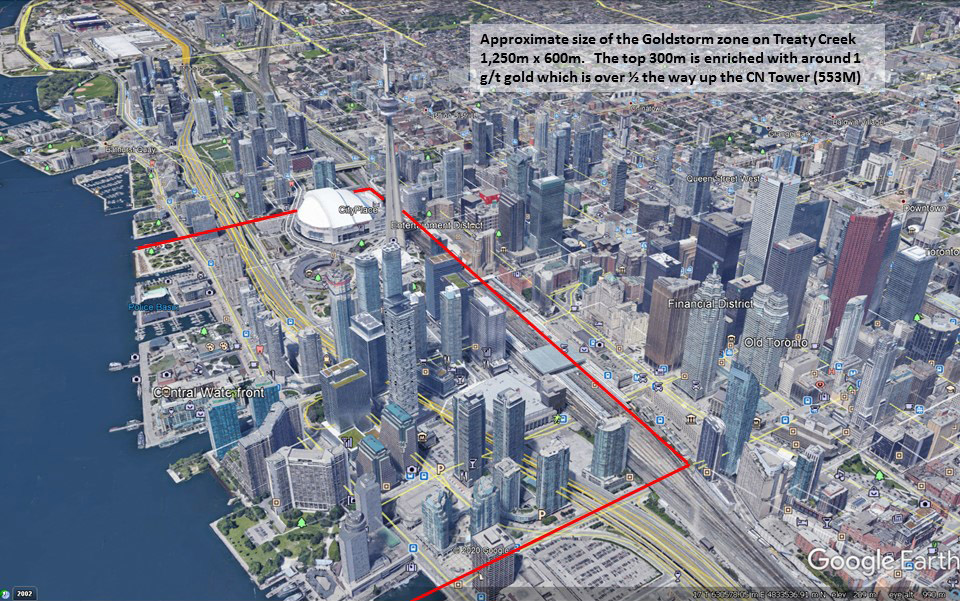 The image above shows the current dimensions of the Goldstorm stretching from Blue Jays Way to Younge Street and from the rail lines out to Lake Ontario.  In places the mineralization extends to a depth of over 2.5 x the height of the CN tower (380 stories).

The edges of the Goldstorm are still not known as it is open to the NE, E, SE and depth.

Tudor Gold has the permits to access the primary drill targets on the Perfect Storm Zone as part of the 2021 drill program.  This will be in addition to expanding the Goldstorm zone.

In late 2014, a significant geological report by JoAnne Nelson and Jeff Kyba of the British Columbia Geological Survey, Ministry of Energy and Mines was published and has had a significant impact on exploration in the Golden Triangle.  The primary geological focus of it is concerning the contact between the volcanic Hazelton and the sedimentary Stuhini bedrock formations which runs through the SHS.  A survey on Treaty Creek was included in the report that sates there are three critical factors in possibly becoming “BC’s next big deposit”.  Treaty Creek has all three qualifiers (More).